When considering paint for the baby's room we wanted to get the healthiest paint option to limit my wife's exposure while pregnant. She initially researched the No VOC paint so she could help me paint. Unfortunately we found out that it's not recommended for you to paint while pregnant even with the greenest of paints because there are still chemical fumes released while it is wet. 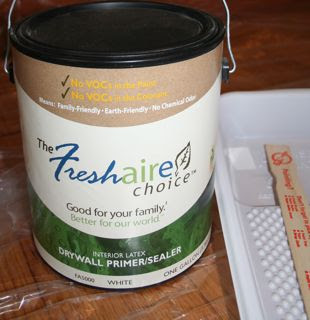 The first paint we tried was the Freshaire Choice paint you can buy at Home Depot. Freshaire requires you to prime the room before you paint for all applications. I learned the hard way a few years ago about not priming when it's required. (Removing peeling paint is not fun.) So after we paid the nice automated check out robot $75 for a gallon of primer and a gallon of paint we were on our way. 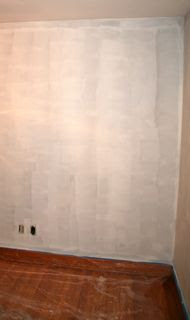 The primer went on easily but unevenly which I believe is normal for a primer. I thought the chemical smell was quite strong with the primer and my lungs felt kind of raw after finishing. So when it came time to use the paint I put on a chemical vapor mask just to be safe. The no VOC paint had an almost non existent odor and went on smoothly, but even with a primer it still required two coats. The dry paint looked really even after it was all dry and was probably my finest masterpiece yet.

There is no accounting for taste. As I found out afterward the no & low VOC paints are only available in limited colors, which was hastily chosen and needed to be repainted because babies don't like neon pink I guess. So we went searching for another paint that could be applied in one coat and I ended up choosing Benjamin Moore's Aura paint which is low VOC. 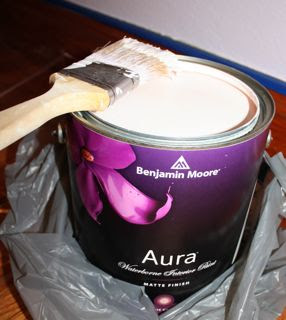 The Aura paint also comes in a limited amount of colors, but since we wanted to do a really light color we figured that we could add tints from another color collection and the VOC's added would be minimal. This paint seamed to have a very light smell that was much less offensive than the Freshaire primer. Unfortunately the paint still took two coats but it is also self priming so it's one more step you can skip. This is good because the paint is expensive at around $50 a gallon, but compared to the $75 spent on Freshaire's paint & primer it was a bargain. The paint is very thick and I kept thinking I was buttering the walls more than painting. I just barely finished the room with one gallon compared to the Freshaire which I had half a gallon left. The Aura paint looked streaky when drying, but when it dried completely it was very even in color and filled in a few flaws in the wall. 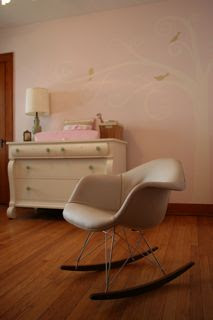 Posted by DIYspirit at 2:32 AM